Edit your information
Username
* Lowercase characters only
Display name
Your signup is complete
A verification email has been sent to someemailuser@email.com. Check your inbox/junk folder for the link to verify your account.
Please add a verified email to your account.
forgot password
register
⚠
We're sorry, to use this web app your browser needs to support
Local Storage

Click Here to open the editor if stopped by popup blocker.
Launch Editor
*Nb. This page is needed for the online editor. Do not close while editing.

About the Image Eraser Tool

The eraser tool operates in much the same way as the brush tool but instead of changing the pixels in its stroke to a selected color it erases the pixels to transparent. To use the eraser you click and drag in the image to erase pixels within the eraser stroke. It is useful in compositing as it is used to clear or erase an area in a layer so that the contents of the layer below can be seen. The eraser tool is often used in combination with selection tools to restrict erasing to an area that defines an object in the layer or image. Upload an image from your computer or use a sample image to try the eraser tool.

How the Eraser Tool Works

To use the eraser tool click the tool icon in the toolbar. This will activate the eraser in the editor and load the tool options bar with the tool settings.

By default the eraser tool erases to transparent. The transparency is indicated by the checkered tiling in the erased area. If you wish to erase to the background color, deselect the transparent background checkbox in the far right of the menu bar color selection panel.

Moving the mouse over the image shows the the eraser tool cursor. The cursor is a circle which has a diameter set by the Size setting in the tool options bar. Changing the 'Size' setting, as shown below, also changes the diameter of the eraser cursor circle. 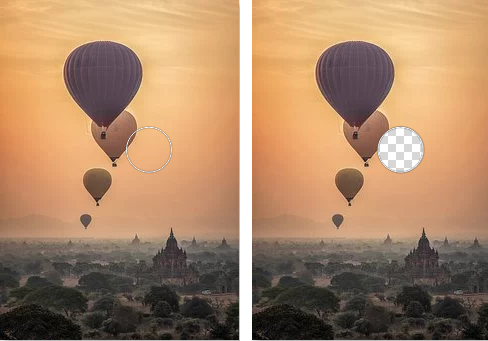 Below shows an image with two eraser strokes. The stroke at the top has 0 blur radius, hence the sharp, hard edge. The stroke below it has a blur of 5 pixels. It has a soft edge because the erased area transitions from transparent to opaque in a 5px border around the stroke edge. 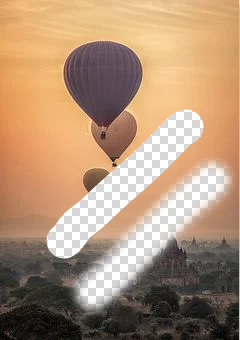 The erase tool does not have to completely erase at all times to full transparency. You can set the Opacity in the tool options to set the strength of the eraser tool. 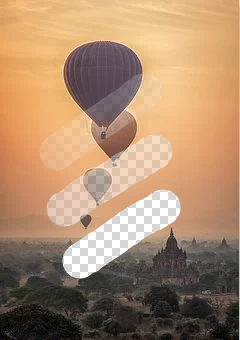 What is the eraser tool?
The eraser tool is an image editing tool used to change the opacity or transparency of the pixels in an image.

What is opacity?
The opacity of an object refers to how much you can see through it. The more opaque the less you can see what is behind it. Opacity is the opposite of transparency and use of either term is a matter of preference. The opacity of the pixels in an image is set by the alpha channel.

Online photo editing with layers, layer masks, a workflow and user interface like a traditional desktop photo editor that provides you with the toolset and features to professionally edit your images. No need to download or use desktop software like Microsoft Paint, Photoshop or GIMP to do quick edits. Edit your images online with the best online image editor.
Export Formats Supported: JPEG, PNG

✖
Some text some message..